Court documents show that Dominique Sharpton filed the lawsuit for $5 million against New York City on May 7 claiming that she would never fully recover from the sprained ankle injuries that she sustained when she tripped on an uneven Soho street on October 2, 2014.

After her alleged accident, Dominque could be seen wearing a walking boot. However, by December she attended the National Action Network’s Justice for All march in Washington, DC. By New Year’s Eve, she could be seen enjoying her vacation in Miami Beach – despite her alleged permanent physical pain and mental anguish.

After Instagram photos of Dominique surfaced on social media showing her hiking in the rugged Red Rock Canyon outside Las Vegas, city Law Department lawyer Michele Fox sent Dominique Sharpton a letter on May 20 in regard to the Manhattan Supreme Court lawsuit warning the plaintiff to preserve all social media photos:

“The purpose of this letter is to demand that plaintiff preserve any photographs, documents, communications and any other information, both tangible and electronically stored, potentially relevant to her alleged trip and fall. This demand should be construed broadly to encompass materials related to plaintiff’s health, mobility, activity or physical limitations after the alleged incident.”

Al Sharpton’s daughter delete case also includes Dominique Sharpton’s digital and non-digital cameras, e-mails, text messages, cellular phones, tablets, and any other similar devices. If Dominique wants $5 million from New York City for her loss of quality of life, pain and suffering, she shouldn’t be sharing her glorious active life on social media, say legal experts. Lawyer David Jaroslawicz commented that Dominique broke a cardinal rule for personal-injury plaintiffs: “If she’s going to claim she’s disabled, the first thing you tell your client is, ‘Don’t live on social media, because even if you don’t lie, it makes you look bad’.” 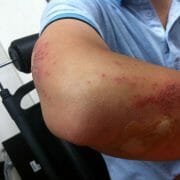 Injured on the Job | Is Sitting Putting You at Risk?

Personal Injury Lawyers Are Concerned Over Consolidation of Zofran Suits