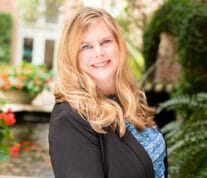 Originally from Arkansas, Jacqueline J. Drescher attended Henderson State University where she graduated in 1992 with a Bachelor’s Degree in Business Administration with an emphasis in Marketing. Throughout college, Jackie was an active member of the Alpha Sigma Alpha Sorority, Tau Beta Sigma Music Sorority serving as president of both. She was also a member of the Henderson State Band and Color Guard, serving for two years as the Color Guard Captain and Coordinator.

After graduation from HSU, Jackie enrolled at the University of Arkansas at Little Rock to pursue her law degree alongside her MBA. She graduated in 1995 with a Juris Doctor of Law degree as well as a Masters in Business Administration.

Upon passing the Arkansas Bar Exam in 1995, Jackie relocated to Charleston , SC where she passed the SC Bar exam and has been practicing law since 1996. She is licensed to practice in both South Carolina and Arkansas. Jackie focuses her practice areas on Workman’s Compensation, Personal Injury and Medical Malpractice.

When she’s not working, she enjoys spending time with her family and friends in beautiful Charleston, SC.
Areas of Practice: